Our goal is to make research from the Cycling in Cities program, and elsewhere, into tools that are useful for policy-makers, planners, and the public.

We received funding from the Canadian Institutes of Health Research for a project with two components: an evidence-based audit of education materials related to cycling; and a tool to allow cities and citizens to evaluate the bikeability of their neighborhoods.

A large body of research has focused on walkability, and there are now popular online tools that allow individuals to calculate a “Walk Score” for their neighbourhood. However, there has been little effort to define and map “bikeability”. There are important differences between walkability and bikeability. For example, whereas sidewalks are important to walking, our research has shown that bike routes (especially those separated from traffic) and flat terrain are key factors to encourage cycling.

Given that determinants of walking and cycling are different, and cycling is an increasingly popular travel choice, we created a measure of bikeability to add to the transportation planning toolbox. The components of bikeability are based on the results of our research on cycling motivators and deterrents. Our bikeability measure was piloted in the Vancouver area (“bikeability heat map” shown above).

We teamed with the Seattle-based company that developed Walk Score to create Bike Score based in part on our bikeability research. Environmental factors important to cyclists are used to calculate Bike Score:

Bike Score is calculated for each location in a city, then mapped. The score can range from a low of 0 (deep red) to a high of 100 (dark green). By examining the “heat maps” of Bike Score for their city, municipal planners can locate neighbourhoods that are currently underserved and target them for improvements. The maps can be separated into their component parts (bike lanes, hills, destinations) to allow planners to determine which components contribute to a lower or higher score in a neighborhood. Individuals can use the maps to choose areas to live or cycle in. 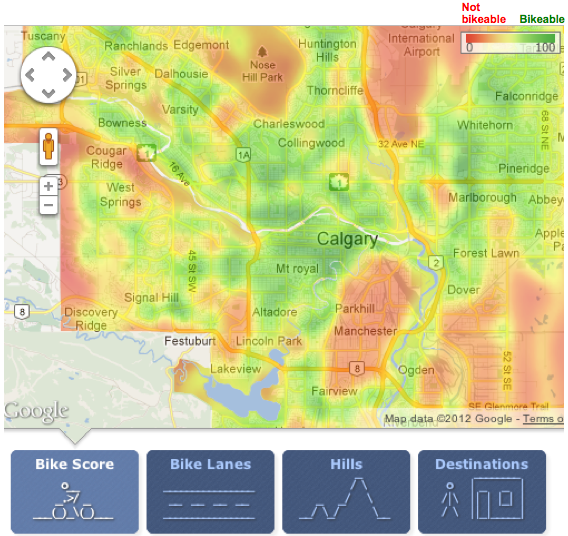 Average Bike Score for 10 Canadian Cities vs. % of Commute Trips by Bike 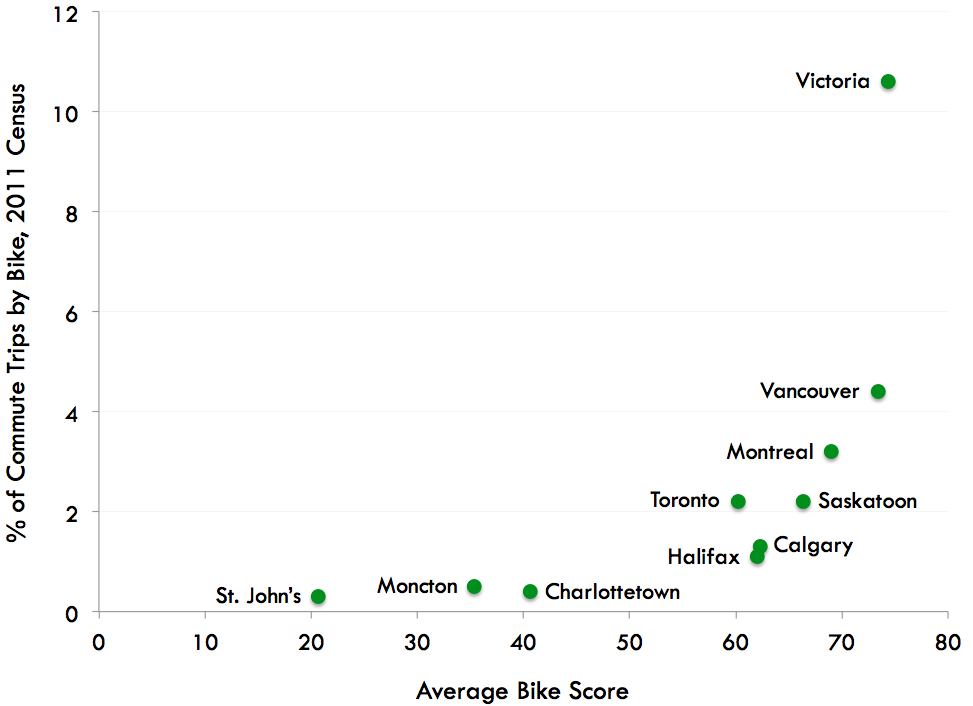 We partnered with Walk Score, to create Bike Score. Heat maps are now available for 12 Canadian cities and ~ 150 American cities, based on our bikeability methods and our motivators and deterrents research.

We also examined the utility of Bike Score as a potential predictor of cycling to work mode share. [pdf]