Cycling safety is important, first because of the injuries themselves. In addition, perceived risks discourage people from cycling, despite consistent evidence that any risks are greatly outweighed by individual and population health benefits:

Data on fatality rates (figure below) from British Columbia (note: no data for bus passengers or motorcyclists) and the United States indicate that the safest mode of daily travel, by far, is bus transit, and the riskiest, by far, is motorcycling. Driving, walking and cycling are intermediate between these. Two modes of transportation, walking and cycling, have countervailing health benefits because they involve physical activity. 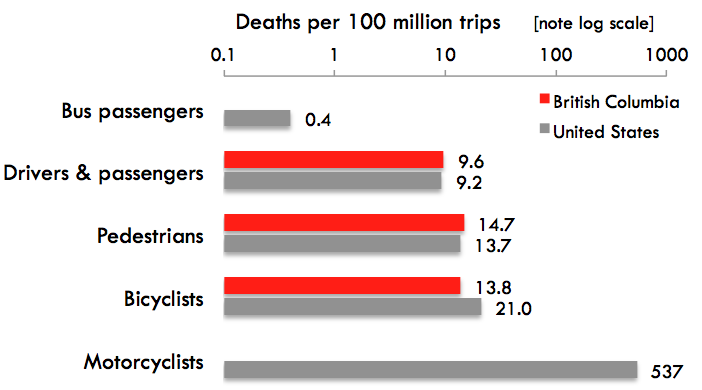 Broader international comparisons indicate that cycling in Europe is safer than in North America. For example, in the Netherlands, cycling fatality rates are about one-third of those in North America. This difference in risk and the concerns about cycling safety that many people express led us to study factors that might reduce injury risks.

If cycling is safer in Europe than in Canada, it can be made safer here. To increase cycling safety, the first step is to understand the determinants of injury risk. One of the factors that differs between European countries with low cycling injury rates and North America where rates are higher is the transportation infrastructure for cycling.

Commuter cycling infrastructure in Canada and the United States tends to place cyclists on road, often beside both moving and parked motor vehicles. In contrast, northern European cities offer more dedicated cycling infrastructure alongside roads, but separated from motorized traffic. The relative merits of these two styles of infrastructure from a safety perspective are the subject of a great deal of debate. As an example, a California transportation engineer, John Forester, has advocated cycling on roads in vehicle lanes with cars as the safest mode of travel (“vehicular cycling”). For many years, his thinking was integrated into North American transportation planning.

The proportion of trips by bicycle is another factor that differs between European countries and North America. In the US and Canada, cycling represents 1 – 2% of urban transportation trips. In Austria, Denmark, Germany, Finland, Sweden, Switzerland and the Netherlands 10 – 30% of urban trips are made by bicycle. Studies consistently support the principle of safety in numbers: death rates and injury rates are lower where cycling modal shares are higher.

Our research on injuries

Because of the importance of injuries to well-being and to choice of cycling as a mode of transportation, our program of research has addressed injuries in a number of ways:

1. Literature reviews on route infrastructure and injuries, and on the risks and benefits of cycling.

2. An innovative study in Vancouver and Toronto, on Bicyclists' Injuries and the Cycling Environment.

Cyclist’s Collision Checklist by the Environmental Law Centre at the University of Victoria. 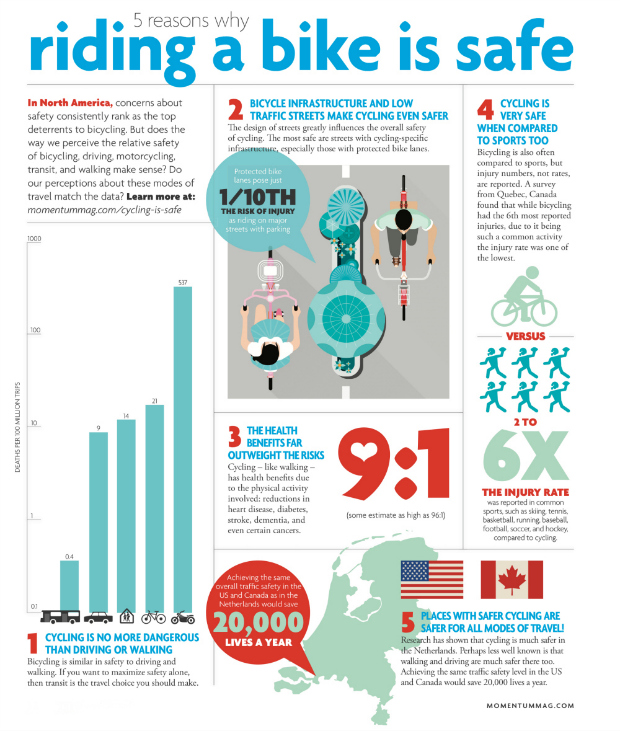