Bike share programs increase access to and use of bicycles by deploying docking stations throughout a city, enabling individuals to make one way bike trips for minimal fees. Such interventions can increase cycling but also walking and transit use, as they help provide efficient connections to and from transit networks, and increase time competitiveness of sustainable modes compared with personal motor vehicles. The systems use adjustable “city-style” bikes, which are easy to ride for people of all abilities.

Public bike share programs remove certain barriers related to bicycle ownership, including concern for theft or vandalism, lack of parking or storage, and maintenance requirements. The programs are becoming common in urban centres, and increasingly massive in scope. Canada is joining this global trend: the first public bike share began in Montreal in 2009 (with 7250 bikes in 2019), and programs were launched in 2014 in Toronto (3750 bikes in 2019) and in 2016 in Vancouver (1750 bikes in 2019).

A unique aspect of the Vancouver bike share program is that the province has an all-ages helmet law that applies to cycling on roads and the city has a bylaw requiring helmets on most off-road paths. The bike share system includes a helmet with every bike. Other large Canadian bike share systems are in provinces that do not legislate helmet use at all (Quebec) or for adults (Ontario) and helmets are not provided. Helmet legislation has been debated as a barrier to uptake of cycling and is seen as a potential threat to the success of bike share programs.

We are taking advantage of the launch of the Vancouver bike share program to examine its impact on travel and health outcomes in the general population, in users of the program, and within key populations. We have the following objectives:

Telephone surveys of ~1000 Vancouver residents prior to and after the summer 2016 launch of Vancouver’s public bike share program showed that a majority (~70%) thought it was a good idea for the City. 43% had travelled by bicycle in the past 12 months, and of the 57% of the Vancouver population who had not used a bicycle in the previous year, 37% said they would consider using a bicycle in the future.

Before the program was implemented, 24% said they were likely to use it, but only 6% had one year after its inauguration. The bike share system did not have an impact on bicycling throughout the city, but was associated with a doubling of bicycling among those who both lived and worked in the service area of the bike share system.

Of those who had not yet used bike share one year into program operation, 23% said they were likely to use it within the next year (potential users) and 77% said they were unlikely to use it. Compared to unlikely users, potential users tended to be younger, employed, have lower incomes, use public transit as their primary mode of transportation, and not own a personal bicycle.

The pre-implementation survey indicated that the most important factors influencing Vancouverites’ likelihood of using the program were a connected network of protected cycle routes and good weather. Post-implementation, top motivators included health/exercise (45%); stations near their home (45%) and destination (37%); and not owning a personal bicycle (40%). The top barriers to using using the system were related to satisfaction with current transportation modes, followed by environmental factors. Cost was a deterrent to 20% of unlikely users, notable given that they have lower incomes than Mobi members (see below).

By 2018, about 5000 people had bike share memberships in Vancouver. Compared to the Vancouver population, members were more likely to be male, younger to middle aged, born in Canada, employed, highly educated, and from a higher income household.

A 2018 survey of members indicated that 39% of trips replaced a walking trip, 35% a transit trip, 17% a car trip, and 7% a personal bike trip. Most trips were combined with another mode of travel. 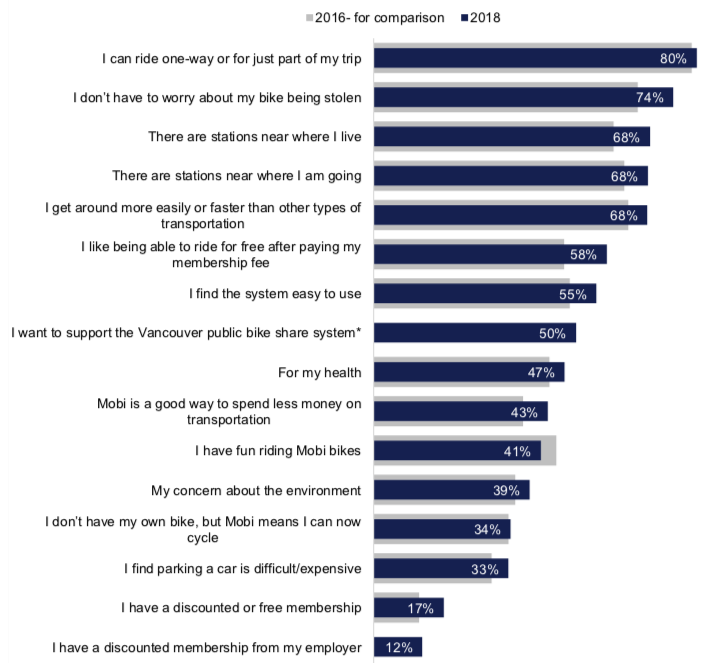 Before the program was implemented, news media reported that the BC helmet law was the likely leading barrier to bike share success in Vancouver. In the population survey, helmets were reported as frequently used (on 75-80% of cycling trips), but about 57% of cyclists reported not using helmets on at least some trips. Lack of access to a helmet and discomfort were the primary reasons for non-use.

Observations were made on fair weather days in 2016 at five screen-line sites and at 15 public bike share docking stations. Observers recorded helmet use, gender, bike facility type, and time of travel of 10,704 people riding personal bikes and 397 riding bike share bikes. Overall, the prevalence of helmet use was 78.1% (n=8,670/11,101), significantly higher for personal bike riders (78.6%) than bike share users (64.0%). Helmet use was more common among women, at weekday morning commute times, and on on-street bike facilities.

The bike share study was led by Dr. Meghan Winters in the Faculty of Health Sciences. This poster summarizes its results: motivators, deterrents, & equity.

Questions were asked about health status, knowledge about bike share programs, use of such programs, cycling habits, collisions with motor vehicles, and socio-demographics.