We used an Opinion Survey to determine which route types and what other factors motivate or deter cycling. The survey used a web or mailed questionnaire to ask 1,402 adults in Metro Vancouver (Canada) about 16 routes types and 73 other factors that might influence their likelihood of cycling. The survey was a sub-study of a larger telephone survey of 2,149 adults. It included demographic information and was used for the Mapping Cycling analysis.

Unique features of the Opinion Survey were that three photos of each of the 16 route types were presented on the questionnaire, and that the 73 features that might affect cycling were derived from an extensive review of the scientific and grey literatures on cycling motivators and deterrents.

The survey was targetted at adults in Metro Vancouver who were regular, frequent, occasional, or potential cyclists. They comprise the “near market” for cycling, that is those most likely to increase the number of trips they take by bicycle. They represent about 31% of adults in the region, or about 500,000 people. 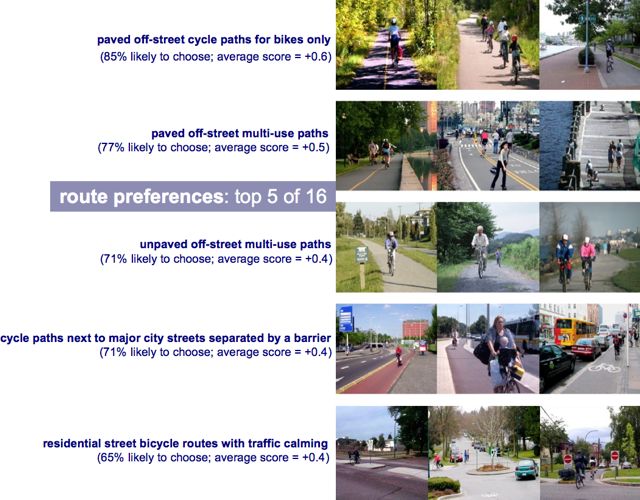 Route use vs. route preference

The following figure shows all 16 route types in order of preference from highest to lowest “likelihood of choosing.” It also shows the order of current use. The fact that the lines cross so much indicates that the routes that people would prefer to cycle are less available. For example “major streets with parked cars,” but without any bike infrastructure, are the least preferred, but are used quite often because they are available. In contrast, “cycle paths next to a major street, separated by a barrier” were rarely used because they are uncommon in this region, but tie as third most preferred route type.

16 Routes Types, Current Use vs. Likelihood of Choosing The figure below shows the likelihood of choosing the route types in a slightly different way – the average score for each route type, for each of three types of cyclist: regular (including frequent), occasional and potential. It shows that the order of route preference varied little across types of cyclists, except that those who cycle regularly ranked unpaved off-street paths and residential streets without bicycle features lower than other cyclist groups. The opinions of this group may reflect the future opinions of others as they cycle more often, so these two route types might be considered less important in route development.

Overall scores of all route types were highest for regular cyclists, then occasional cyclists, and finally potential cyclists. Women and people with children scored routes similarly to occasional and potential cyclists, that is, only routes separated from traffic or on quiet streets received positive average scores. This evidence suggests that to motivate people who cycle least often, the most desirable routes – those separated from traffic – should be the focus of development. 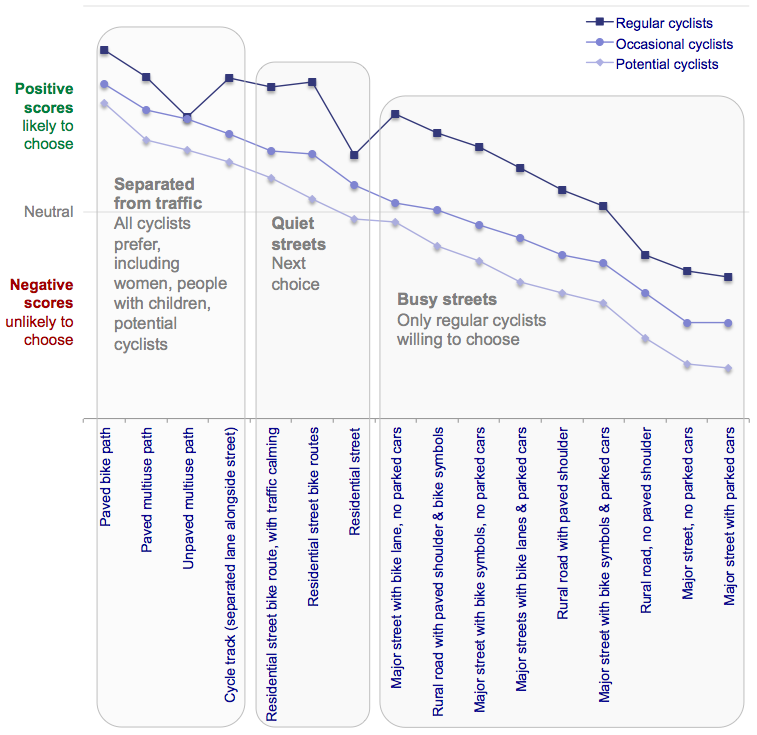 Collectively, this evidence suggests that the top route types to encourage cycling in each of three different transportation zones are:

Of the 73 features that might influence likelihood of cycling, the following were the top 10 motivatorswith average scores from +0.5 to +0.8 (with a maximum possible of +1=”much more likely to cycle”):

The following were the top 10 deterrents with average scores from -0.9 to -0.6 (with a minimum possible of -1=”much less likely to cycle”):

Focus groups sought additional detail about the reasoning behind people’s preferences in the survey. The focus groups results are available as a report and a poster: “What Makes a Neighbourhood Bikeable“.

A brochure summarizes results of the opinion survey. This leaflet was prepared for a meeting in February 2009 between Vancouver City Councillors and the city’s Bicycle Advisory Committee to highlight preferred bicycle facilities. This poster was presented by Meghan Winters at the ProWalk ProBike Conference in Seattle, September 2-5, 2008.

The results of this survey have been published in two scientific articles, one on cycling motivators and deterrents, and one on route preferences.

31% of adults in the Vancouver region were in the near market for cycling.

The best route types to encourage cycling were:
- paved off-street bike paths
- residential streets with traffic calming
- cycle paths next to major streets, but separated from motor vehicles by a curb or other barrier (also known as "cycle tracks")

Route design features that encourage cycling included:
- cycling routes away from traffic and noise
- near beautiful scenery
- separated from heavy and high speed traffic
- with minimum slopes and distances
- with smooth, non-slip surfaces clear of debris

This brochure, leaflet and poster summarize the results.