This study, “Understanding the impact of the built environment on decisions to cycle as a mode of urban transport”, was funded by the Heart and Stroke Foundation of Canada and the Canadian Institutes of Health Research in 2007.

The study used three methods to understand which features of the built environment influence people’s choices to cycle:

The results of the analysis were used to create a bikeability index.

Links between cycling & the built environment

These analyses used part of our Opinion Survey data: 2,149 adults in the Greater Vancouver region completed a telephone interview in which they reported their origins, destinations, and modes of travel for weekly trips. We linked this trip data to mapped data on population, land use, topography, and the transportation network. This included using Geographic Information Systems (GIS) to map trips, generate travel routes, and develop measures of the built environment. The linked data was then analyzed to determine which objective factors influence choice of cycling as the mode of transport. 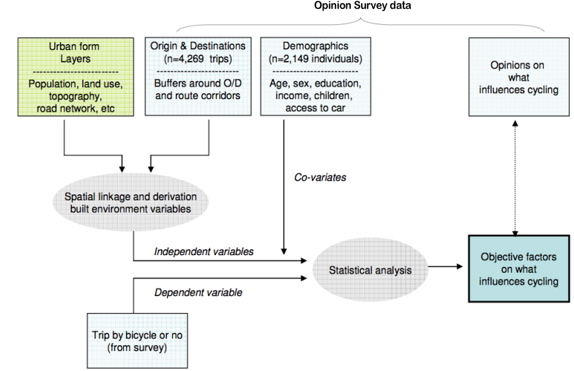 This work identified features of the built environment associated with a higher likelihood of cycling, versus driving. It applied a novel spatial approach, measuring features of the trip origin, destination, and the route between them, and adjusted for personal characteristics and trip distance.  The results indicate that the built environment is associated with mode choice and specifically that urban form is important not only at the trip origin, but also along the route and around the destination.

We created a bikeability index, based on 5 components identified in our opinion survey as important to cyclists, then explored in focus groups and validated by the travel behavior mapped analysis. These components are:

The index is explained in this poster on bikeability presented at the Third North American Congress of Epidemiology in Montreal, June 2011.

We used the index to create bikeability maps that identify areas more and less conducive to cycling, using Metro Vancouver as a case study (see below). The large map is based on the overall bikeability index scores, and the smaller ones are based on the scores for the five components. Together these can be used to guide local strategies to improve cycling conditions. 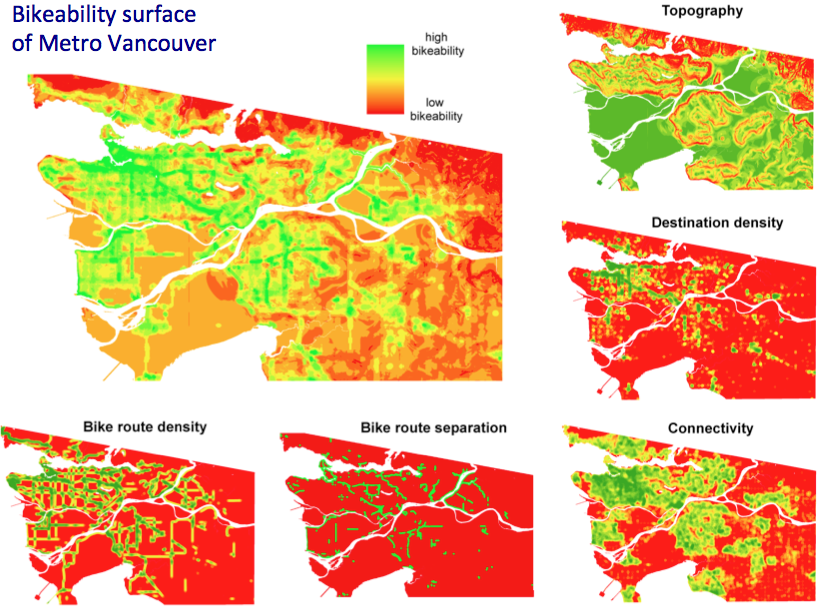 Because we mapped bikeability as a continuous surface, the index can be scaled (city versus region) or aggregated (to compare municipalities or neighbourhoods), as shown below. 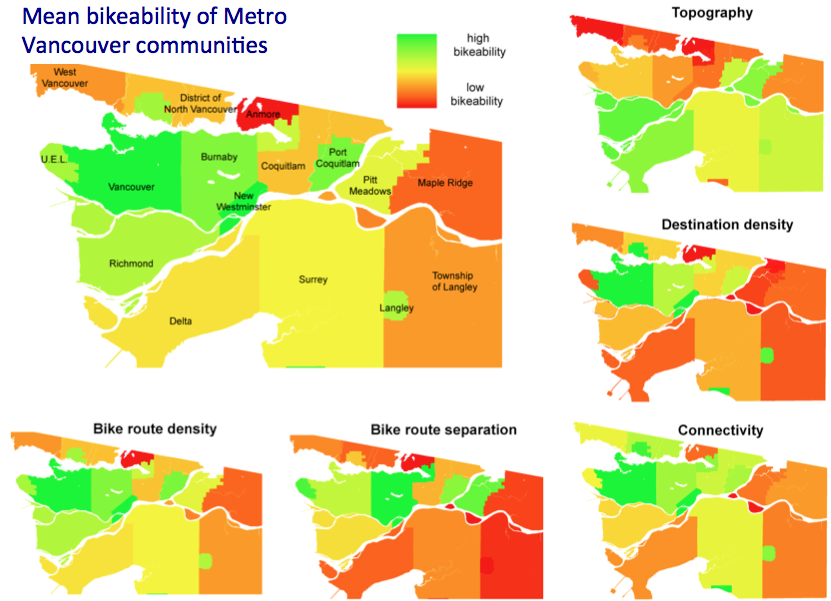 Poster presented on Bikeability at the Third North American Congress of Epidemiology in Montreal, June 2011.

Scientific article on built environment influences on choices to cycle vs. drive.

Brochure on how far cyclists are willing to detour for cycling-specific infrastructure. Meghan Winters’ poster on this work at the Transportation Research Board in Washington DC in January 2010 and abstract of a paper to be published in their journal.

Report and poster of the results of focus groups about “What Makes a Neighbourhood Bikeable” by Meghan Winters and Adam Cooper, conducted in conjunction with TransLink.

Posters presented by Meghan Winters at the Velo-city 2009 conference in Brussels: one on an innovative route planner developed by our team (many of whose features have now been incorporated into Google Maps) and one on the focus group results.

How Far Will Cyclists Detour?

We interviewed 74 cyclists about their cycling and driving trips, and compared features of the shortest routes between the start and end of their trips, and the route that was actually taken.

This brochure and poster describe the results.