While the health benefits of exercise via cycling are estimated to substantially exceed any health impacts related to air pollution exposure or injuries from traffic collisions, cyclists are known to experience elevated exposures to traffic-related air pollutants. In addition, our research on cycling motivators and deterrents identified traffic-related air pollution exposure and traffic as major factors influencing the choice to make a trip by bicycle.

The objective of this study was to investigate the relationship between traffic-related air pollution exposure and respiratory and cardiovascular health impacts in commuting cyclists. Specifically, we are

An article in the Huffington Post outlines the issues. 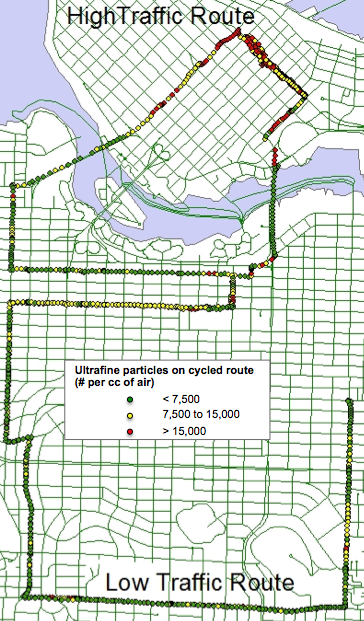 This study used a randomized (single) blinded crossover design. Each subject bicycled along two separate routes, while air pollutant levels along each of the routes were measured. Before and after each cycling session, subjects’ lung function and endothelial dysfunction were measured and a blood sample was collected. While cycling, subjects wore a heart rate monitor, and a cycling computer measured and recorded their work rate. At the end of each cycling session subjects’ minute ventilation was measured and related to their heart rate and work rate by cycling in the laboratory on a stationary bike while breathing into a respirometer. This helped us understand how much the cyclist breathed at different levels of effort throughout the ride. The health endpoints were endothelial function, lung function and markers of inflammation.

Active transportation is a non-polluting form of transportation, and is increasingly encouraged by public health agencies as a way to improve air quality as well as physical fitness. While exercise is promoted as healthy behaviour, cyclists may experience higher doses of air pollution compared to other transportation modes due to their elevated breathing rates and cycling in proximity to traffic, especially during periods of elevated air pollution.

The information from this study may be useful for providing advice to the public regarding about where and when to cycle (or where to reduce motor vehicle traffic) in order to achieve health benefits while at the same time minimizing potential adverse impacts related to air pollution exposure.

The results have been published in a scientific journal.

We presented the following at Velo-City Global 2012: A video with Christie Cole and Catherine Steer explaining the results of their study of cycling, air pollution and health.

A scientific article on the results.